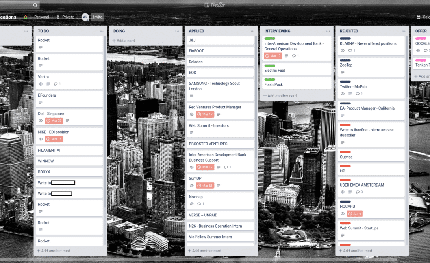 Finding an internship was definitely not easy and rather stressful. It’s the main objective for everyone in the first year. It seems that European companies are less attracted by MBA internship programs than their U.S. counterparts.
I had a focus on Tech, which makes the application a bit more difficult because the recruiting starts much later (February – March). While consultants and bankers usually figure out their internship plans around January-February, you only start applying in Feb and most of us secure an internship in late April-early May.

IESE has a portal where the careers services post all kind of internship positions available. The portal is great to find opportunities and I believe most of the students find a job through there. I definitely got most of my interviews from there.

I reached out to a maximum of people, sometimes passively like when I sent an automated message to my entire LinkedIn network. I definitely got positive responses, but not really in jobs that were super appealing to me. When I reached out directly and asked for a meeting or a call to discuss summer opportunities, it fell short.

I subscribed to these internship platforms. Most of them lead to nothing. These portals are really focused on U.S. jobs and if you don’t have US working permit, it’s basically useless. Also, they don’t update their website that often so interesting jobs ads are usually quite old.

The career forum did not really work for me. The October one is really early and most companies come to hire second years for a full-time job. It’s still super interesting to go as your favourite companies come and explain their culture and some cool stuff they are working on. I did make some interesting connections, but really not that many. The Startup career fair in May was, in my opinion, much more interesting in terms of opportunities. I managed to get squeezed in an on campus interview with Klarna, but they weren’t really hiring interns, another miss.

I used Trello to keep track of my applications. I made “TO DO”, “APPLIED”, “INTERVIEWING”, “REJECTED” and “OFFER’ columns. The tool was really helpful to make sure I could send update requests to recruiters, I also used to gather websites and relevant information per company.

Now the numbers, Over a total of 62 applications sent, I got 12 interview invites. 20% success is not too bad!
23 application never received a reply. More surprising, 5 employers never came back to me after we had an interview. Some of them were startups but also very large companies (HP and IADB).

In the end, I’m super happy with my internship. But it was super stressful to find one. There is no way around it, A/B testing cover letters and network is the key to get an interview. To get an offer, the most important is to properly understand the culture of the company and build personal stories around them.

Waïna Landauro is an IESE MBA graduating in 2020. He did his internship at Google during the summer of 2019. Author of iesemba.com and creator of the business videogame The nasty consultant. He’s currently looking for his next role – starting April 2020. Talk to digital waina via his chatbot